Thank you for your interest towards Orfect, Observatory on Religious Freedom in the jurisprudence of the European Court of Human Rights. Orfect is an international network that counts more than 40 scholars. At the same time, it is an Interdepartmental Research Center carried on between the Department of Law, the Department of Education and Human Sciences and the Department of Linguistic and Cultural Studies of the University of Modena and Reggio Emilia, with the aim of bringing together interdisciplinary skills and knowledge involving FoRB. Orfect brings together European professors, researchers and PhD students with the aim of developing interdisciplinary skills and knowledge on FoRB. Hence, particular emphasis is placed on research focusing on religious freedom in secular societies, and the interaction of religion, law and politics. Focusing on major developments at the level of the Council of Europe (CoE) and the European Court of Human Rights (ECtHR) the aim is to foster international collaborative projects and also develop successful university-industry partnerships.

Freedom of Religion or Belief in Times of Migration

Wars, economic crisis, climate change are just some of the factors underlying the mass-migratory movements that characterize contemporary society. The negative effects of globalization have led to a general impoverishment of some areas of the world, and the apparent enrichment of the so-called Global North – which is none other than the canonical, capital-exporting West. Migratory movements have brought, among their most significant consequences, the emergence of minority communities in host states – communities characterized by common languages, cultures, ethnicity, and religion. Freedom of religion or belief, as conceived in global and regional instruments of international law, is therefore exposed to new challenges, brought forward by nationalism, protectionism, distrust, and the overarching presence of the original culture and religion of the host state. In this conference, we aim at assessing the role of freedom of religion or belief in facilitating or hindering migration. Contributions shall cover aspects such as (but not limited to):

– The relationship between the freedom of religion or belief and religion-related persecution under the 1951 Refugee Convention;

– Freedom of religion or belief in asylum reception centres;

– The role of religion in refugee status determination procedures;

– The role of majority churches in welfare services and legal counselling for migrants;

– Freedom of religion or belief and the non-refoulement principle;

– Residence and employment of foreigners and freedom of religion or belief;

-(Real or potential) tension between the rights of minorities and requirements of “living together”.

The conference will bring together scholars working in international law, law and religion, international relations, history, philosophy, and related disciplines. We are seeking empirically- as well as theoretically-oriented paper proposals that address one or more of the above questions. Different disciplinary approaches are welcome, as long as the focus remains on the main topic of the conference.

Please submit your abstract of no more than 500 words, accompanied by a short CV, by 15 June 2022 to orfectconference@gmail.com. We aim at communicating the results of the selection process in early June. We will cover accommodation for all speakers, although we are unlikely to be able to contribute to travel expenses. 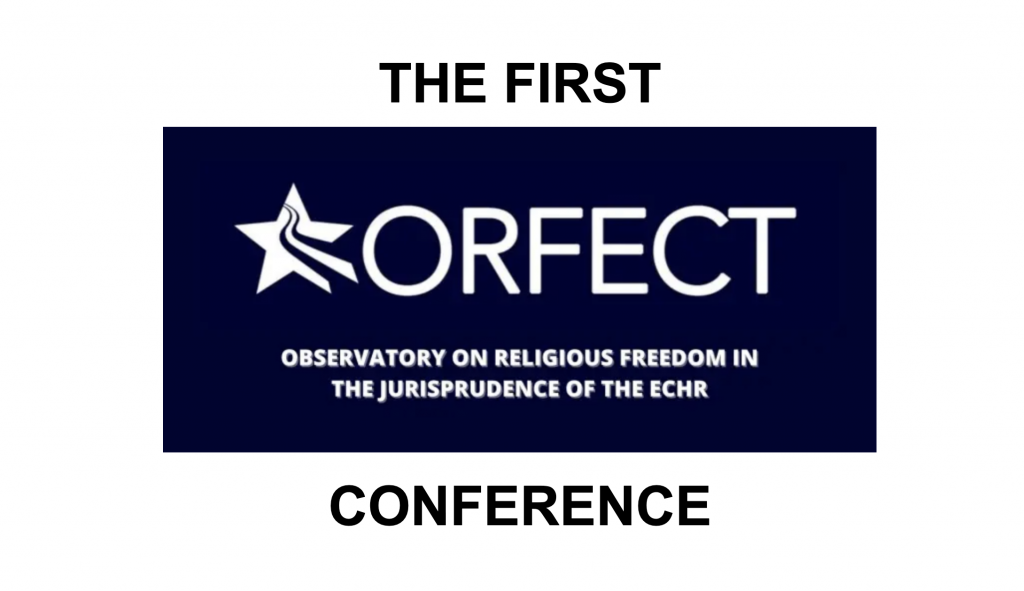 The aim of the “Observatory on Religious Freedom in the jurisprudence of the European Court of Human Rights” (ORFECT) is to analyze the decisions of the ECtHR impacting on FoRB from the perspective of the secularism and non-discrimination. In particular, ORFECT will address cases related to religious freedom presented before the Court, study possible solutions and provide recommendations and opinions to be possibly used in a trial. ORFECT, moreover, will promote a culture of respect of religious freedom, non-discrimination and equal opportunities by means of awareness and communication campaigns other than positive action projects; it will organize and manage conferences and seminars, studies, researches and training activities regarding reasons, forms and possible solutions about religious freedom and non-discrimination.